Fumaric acid or trans-butenedioic acid has the formula HOOC-CH=CH-COOH (C4H4O4). This white crystalline compound is one of two isomeric unsaturated dicarboxylic acids, the other being maleic acid. In fumaric acid the carboxylic acid groups are trans and in maleic acid they are cis. Fumaric acid has a fruity taste. The salts and esters are known as fumarates. The primary hazard is the threat to the environment. Immediate steps should be taken to limit spread to the environment. It is combustible but may be difficult to ignite.

Maleic acid is converted by thermal or catalytic cis–trans isomerization into fumaric acid. The most common catalysts used are mineral acids, peroxy compounds, and thiourea. The crude fumaric acid obtained in this way is purified by crystallization from water.

As a food additive, it is used as an acidity regulator and is generally used in beverages and baking powders. It is generally used as a substitute for tartaric acid and occasionally in place of citric acid, to add sourness, similar to the way malic acid is used. It is also used as a coagulant in stovetop pudding mixes.

In patients with relapsing-remitting multiple sclerosis, dimethyl fumerate significantly reduced relapse and disability progression in a phase 3 trial. It activates the Nrf2 antioxidant response pathway, the primary cellular defense against the cytotoxic effects of oxidative stress.

Fumaric acid is used in the manufacture of polyester resins, livestock feed, cosmetics, mordant for dyes. 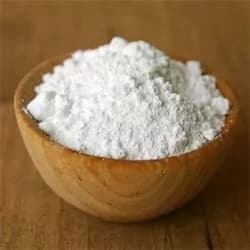